Current Issue Volume No: 1 Issue No: 1

Gastric cancer is one of the most common types of cancer in the world, usually diagnosed at an advanced stage. Despite the advances in specific anticancer agents' development, the survival rates remain modest, even in early stages. HER2 overexpression was identified on 15% - 20% of gastric cancer patients. Trastuzumab-based chemotherapy provides obvious efficacy improving outcomes of HER2 positive gastric cancer patients. We performed a meta-analysis to estimate the efficacy of the addition of trastuzumab over chemotherapy. We identified randomized controlled trials (RCTs) which compare the addition of trastuzumab therapy to chemotherapy alone reporting progression-free survival (PFS), time to progression (TTP), overall survival (OS), and/or response rates as our eligible trials. Night trials including 1101 patients were eligible for analysis. Trastuzumab therapeutic partners were cisplatin (9 RCTs), 5-fluorouracil (8 RCTs), capecitabine (6 RCTs), irinotecan (1 RCTs), docetaxel (1 RCTs), oxaliplatin (1 RCTs), and leucovorin (1 RCTs). The addition of trastuzumab agents improved OS (HR = 0.80; 95% CI = 0.72 - 0.89), PFS (HR = 0.70; 95% CI = 0.59 - 0.83), TTP (HR = 0.69; 95% CI = 0.57 - 0.83), and overall response rate (RR = 1.22; 95% CI = 0.94 - 1.59), DCR (RR = 1.19; 95% CI = 1.10 - 1.28). Our meta-analysis affirmed the efficacy of adding trastuzumab agent to chemotherapy in HER2 positive gastric cancer.

Human epidermal growth factor receptor 2 (HER2) is involved in the pathogenesis and poor outcomes of several types of cancer, including advanced gastric cancer and gastro-oesophageal junction adenocarcinoma[1]. HER2 is a member of the HER family, encoded by proto-oncogene ERBB2 on chromosome 17, and consists of four plasma membrane-bound receptor tyrosine kinases which transmit extracellular signals to initiate cellular signaling pathways by phosphoinositide 3-kinase (PI3K), mitogen-activated protein kinase (MAPK), signal transducer and activator of transcription (STAT), phospholipase C (PLC) and protein kinase C (PKC)2. Trastuzumab, an immunetargeting therapeutic antibody monoclonal antibody directed against HER23. Over the last decade, trastuzumab has revolutionized the treatment of HER2-positive breast cancer and improved its outcomes4. Based on these findings, trastuzumab is now considered a key drug for treating HER2-positive breast cancer. With increasing understanding of the molecular biology of HER2, and the availability of genomics and proteomics analyses, it has now been recognized that HER2 is also present in other cancers, particularly in gastric cancer 1, 5.

In this study, we performed a meta-analysis to estimate the efficacy of trastuzumab-based chemotherapy on HER2-positive advanced gastric cancer. The major endpoints used in clinical trials were overall survival (OS), progression-free survival (PFS), intermediate endpoints of time to progression (TTP), overall response rate (ORR) and disease control rate (DCR). We try to find the best strategy for second-line treatment of HER2 positive gastric cancer.

We selected phase II or III randomized controlled trials (RCTs) comparing the efficacy of trastuzumab-based chemotherapy in gastric cancer. We included trials of gastric cancer patients with HER2-positive status. We excluded trials if they compared only the outcomes of different HER2 treatment dosing scheme, only measurement toxic effects, quality of life, pharmacokinetic efficacy or without control and case-control experiment. Studies were excluded without sufficient published data for estimation of the odds ratio (OR), and 95% confidence interval (CI) as well.

We extracted data strictly abide by Cochrane guidelines. Two reviewers (Huahui Li and Bihua Lin) evaluated independently the titles and abstracts of eligible publications to determine trial inclusion. Including design of trial, eligibility of patient, baseline characteristics of patient, dosing scheme, treatment line, HER2 identification method, follow-up duration and therapy changes on disease progression. Any disagreements between reviewers were resolved by a third researcher (Keyuan Zhou). If the test results repeat in various publications, we got the most complete endpoints.

Log HRs and standard errors were calculated for OS, PFS, and TTP endpoint. Inverse-variance method was used for pooled the separate trial log HRs. Mantel–Haenszel method pool the rate-based secondary outcome15, 16. Based to Cochrane Handbook for Systematic Reviews of Interventions Version 5.0.2, heterogeneity with I2 <25% indicating low heterogeneity, 25 % <I2<50% indicating medium heterogeneity. Results with low heterogeneity were using fixed effects models; otherwise using random effects models. All studies were carry out using the Stata Version 12.0 (Stata Corporation, College Station, TX, USA), the publication bias evaluated by Begg’s test (P<0.05 was considered significant). Each study was assessed by risk assessment of Cochrane Collaboration tool. A grade was defined as high-quality, low risk of publication bias, or else they were considered as low-quality. The quality assessment analysis outlined in Figure 1.

We identified the titles and abstracts of 446 citations, 69 articles excluded. The full-text reports of 377 articles were took to further determine eligibility. Night manuscripts were included in the meta-analysis17, 18, 19, 20, 21, 22, 23, 24, 25. The night trials represented 1101 patients, 562 obtaining the trastuzumab and 536 receiving chemotherapy alone (Figure 2). If papers included both HER2 positive and negative patients, only HER2 patients were included in our meta-analysis18. Chemotherapy partners included capecitabine + cisplatin or 5-fluorouracil + cisplatin(5 trials)17, 19, 20, 21, 25, Docetaxel + cisplatin + 5-fluorouracil (2 trials)18, 23, Irinotecan + 5-fluorouracil/Leucovorin (1 trial)21, trastuzumab + capecitabine + oxaliplatin (1 trial). Overall, 4 studies were reported in English and 5 in Chinese. Trials were either first line or a second or subsequent line of therapy. The trials of HER2 positive disease was via identified immunohistochemistry (IHC) + or FISH+. We further analysis of these studies characteristic in Table 1.

Figure 3. The OS, PFS and TTP for trastuzumab-based chemotherapy 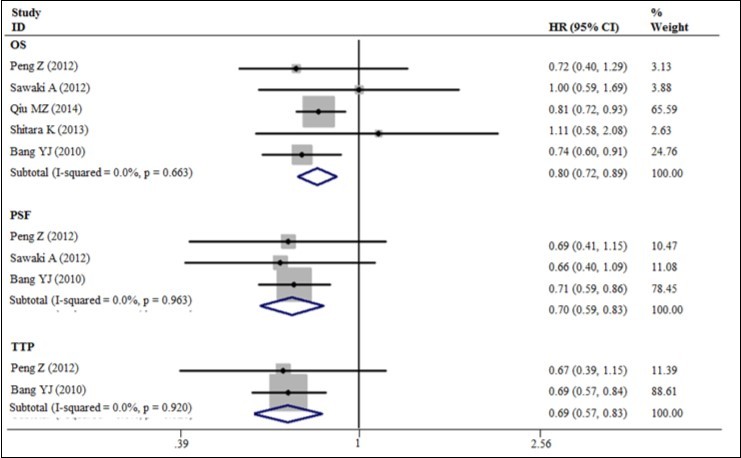 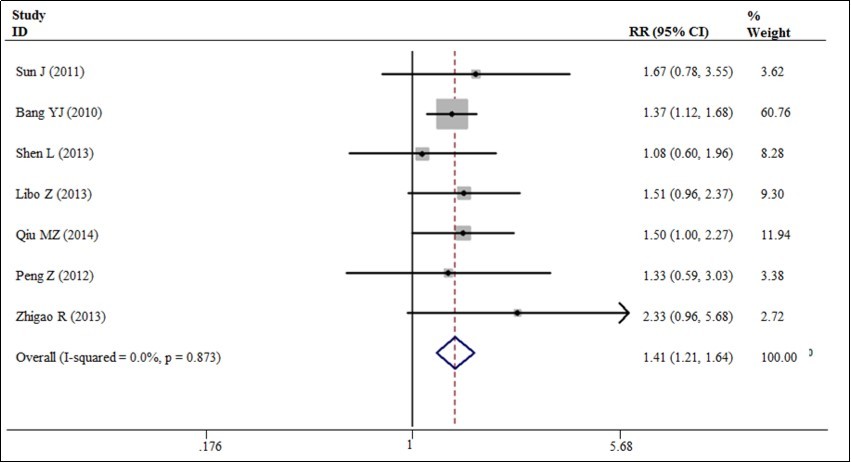 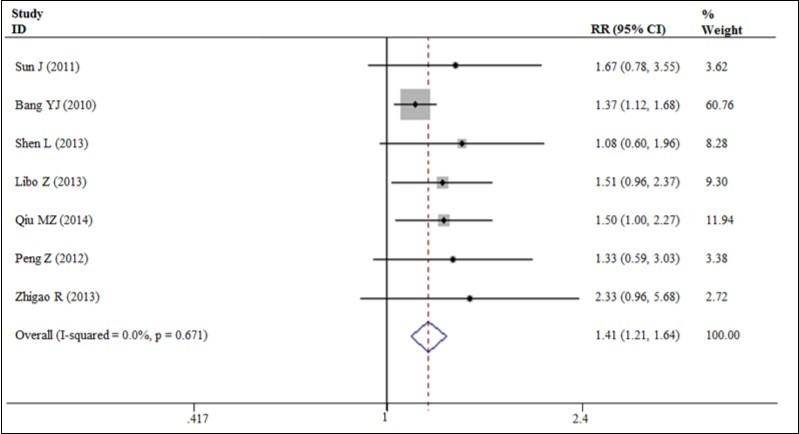 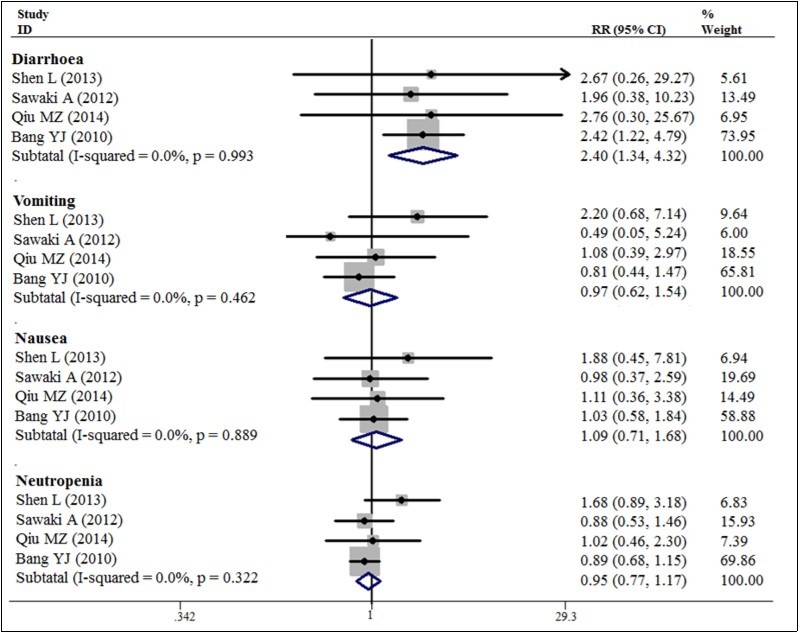 Oursensitivity analysis was executed by successively eliminating studies one by one. The elimination of one study each time revealed no significant difference in whole estimates, suggesting the stabilization of these results.

Our pooled results of 9 studies show that the addition of trastuzumab therapies to chemotherapy provides a 20% improvement in OS. PFS and TTP show a 30% and 31% improvement, respectively, and significance increase in ORR of 41%. The pooled results improve some of the uncertainties about the benefit of trastuzumab therapies. Some trials included only small patients don’t report on the endpoint of OS, PFS or TTP. A few HER2 combination therapies have been evaluated in a randomized controlled trials design, specifically capecitabine, cisplatin, 5-fluorouracil, irinotecan, docetaxel, Leucovorin and oxaliplatin). It may be helpful to carry out further clinical trials to compare the efficacy of trastuzumab therapy over chemotherapy. The clinical evidence suggest that trastuzumab therapy could be continued on patients with HER2-positive gastric cancer, even in patients who need to discontinue chemotherapy because of adverse reactions. Additionally, more data are still needed to confirm whether trastuzumab should be continued after disease progression. The introduction of trastuzumab led to the establishment of a new disease entity, “HER2-positive gastric cancer,” similar to HER2-positive breast cancer. It is expected that more and more anti-HER2 drugs should be developed and introduced into clinical practice to treat patients with HER2-positive gastric cancer.

Due to the various therapeutic scheme and small sample of trials, we can’t undertake a subgroup analysis of individual therapeutic scheme. This study also has a lot of limitations, some of which are approach in meta-analysis and others detailed to our analysis. We don’t have personal patient data in order to confirm outcomes data showed in publications. Moreover, we are incapable to confirm blinding procedures or randomization26. In addition, the current included trials are lack of long-term follow-up data. These limitations in clinical practice call for building an unbiased and current evidence to support the best use of trastuzumab therapies. Reporting diverse greatly in the included trials such as the endpoints are used and the way are expressed. The endpoints HRs and CIs included in our study are not always reported in every trial. However, many trials report the period of advantage in days, weeks or months. We try to fill some of the gaps by contacting individual researchers, but we fail to obtain additional data.

The results of this study show that trastuzumab-based chemotherapy can significantly improve overall survival in patients with HER2-positive advanced gastric cancer, compared with chemotherapy alone, and this improvement is particularly significant in patients with high HER2 expression. It is also notable that trastuzumab don’t increase the incidence of adverse events that associated with chemotherapy and that the rate of cardiac events is also low. Therefore, These studies should support an indication for trastuzumab as part of a perioperative chemotherapeutic regimen for treating HER2-positive gastric cancer.