Journal of Aging Research and Healthcare

Current Issue Volume No: 4 Issue No: 1

High incidence of diseases, increased population growth, unemployment, and altered ethical values have been widely dominant in 21st century 1. With high use of antibiotics and other drugs, multidrug resistance is the common cause of high mortality and treatment failure 2. Thus, most of the research has been focusing towards immunomodulation, which would significantly help the immune system to fight against broad spectrum of diseases. This will manipulate the state of activity of the immune system either increase or decrease depending on the immune response. Immunostimulation/immunopotentiation is the augmentation of immune response, while immunosuppression referred to the suppression of immune responsiveness 3. Thus, using various complementary source of medicine, which are supposed to be safe as compared with the synthetic molecules, immune response is altered at desired level 4. Immunomodulation play a vital role in aging and its associated disorders. In aging, various physiological functions have been progressively declined and are associated with dysfunction of body function leads to death. Oxidative stress is one of the major factors along with other such as alcohol intake, air pollutions, environmental pollutants, physical stress, and radiations, etc. are some of the extrinsic factors, which results in generation of free radicals causing damage to body cells 5, 6. Thus, any formulations that have significant immunomodulatory activity can be used as anti-aging formulation against various disorders. Thus, with this respect a new proprietary test formulation was formulated containing mixture of minerals (zinc chloride, magnesium gluconate hydrate, and ferrous sulphate, copper chloride) and vitamins (pyridoxine HCl, cyanocobalamin, and cholecalciferol). Each constituent of this formulation is commonly used as nutraceutical supplement 7, 8. The immunomodulatory agents have the ability to normalize or modulate pathophysiological processes, while minerals such as zinc and magnesium has enzyme catalyzing activity and minimizing the production of inflammatory cytokines 9, respectively.

Randomly breed maleSD rats with body weight around 300 gm were used in this study. The animals were purchased from M/s. National Institute of Biologicals, India. Animals were randomly divided into nine groups based on their body weights consist of ten animals of each group. They were kept individually in sterilized polypropylene cages with stainless steel top grill having provision for holding pellet feed and drinking water bottle fitted with stainless steel sipper tube. The animals were maintained as per standard protocol throughout the experiment.

Assessment of Cellular and Humoral Responses

In order to study the humoral immune response, IgA, IgE, IgG, and IgM were estimated using Mini Vidas, Biomeurix (French) from serum, using commercially available kits as per manufacturer’s instructions. Flow cytometry was used to evaluate the CD4+, CD8+, & CD28+ cells in whole blood as a measure of the cellular immune response using Guava Flow Cytometer, EasyCyte. The mean value was calculated for each group with SEM. The percent change in the Biofield Energy Treated/Blessed group was calculated compared to the vehicle treatment group.

Determination of Hematological and Biochemical Parameters

All the animals in different test groups were analyzed for various clinical signs and symptoms in accordance with in-house protocol. Abnormal behaviour in animals was recorded with the time of onset and disappearance.

All the rats were subjected to histopathological analysis at the end of the experiment, while the organs of all the animals such as liver, kidneys, heart, spleens, lungs and uterus were excise for relative organ weight. The organ to body weight ratio percentage was identified by comparing the weight of each organ with the final body weight of individual rat. Histopathological examination of all the collected samples was placed in 10% neutral buffered formalin.

Relative organ weight was calculated using the formula mentioned below-

All the animal experimental data of immunological studies were expressed as mean ± standard error of mean (SEM) followed by Student’s t-test. Statistical significance was considered at p≤0.05. 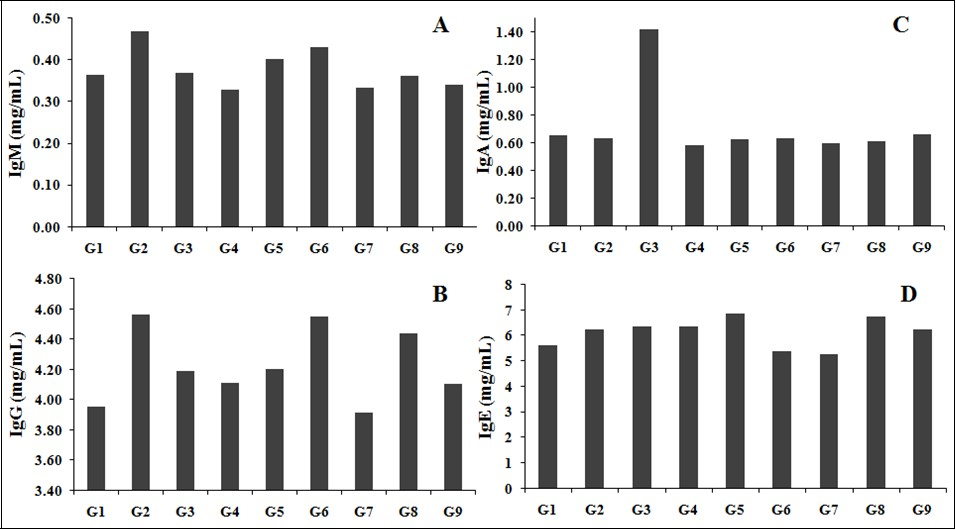 IgM, IgG, IgA, and IgE are considered as the major immunoglobulins, which regulates the immune system 36. The test formulation used contained vitamins and minerals, which are reported to have significant immunomodulatory activity. Moreover, various studies reported that there is a correlation between immune response and activation of anti-aging gene Sirtuin-1 expression 37, 38. Therefore, the effects of the novel test formulation and the Trivedi Effect®-Biofield Energy Healing may activate the anti-aging gene Sirtuin 1 that is connected to the immune system, oxidative stress and improving overall health. Besides, literature also cited that activation of heat shock gene Sirtuin-1 is due to improvement of immune system 39, 40. Thus, the effects of the Trivedi Effect®-Biofield Energy Healing may possibly involve activation of the heat shock gene Sirtuin 1 that is connected to mitochondrial function, immune system, cell senescence and apoptosis. All-inclusive, the data suggested that the Biofield Energy Healing Treatment has significantly modified the immune response and altered the immunoglobulin production in various test groups, could be used as antiaging potential.

The test formulation was tested for cellular immune response, which was estimated by calculating the percentage of vital biomarkers such as CD4+, CD8+, and CD28+ and the results are presented in the Figure 2 (A-B). CD28+ level of rats treated with D-galactose (G2) was 61.20 ± 1.00%, which was higher than the control (G1) group 54.28 ± 1.49% (p<0.01). The results showed the percentage of CD8+ was significantly increased by 20.67% in the G8 group, while % of CD28+ was significantly increased by 5.44%, 11.70%, 8.32%, and 9.82% in the G5, G7, G8, and G9 groups, respectively after Biofield Energy Treatment to animals as compared with untreated test formulation. This experimental data suggested that the Biofield Energy Healing Treatment has shown a significant improved cellular immune response in the test groups as compared with the untreated test formulation, which showed its use in many inflammatory and autoimmune disorders. 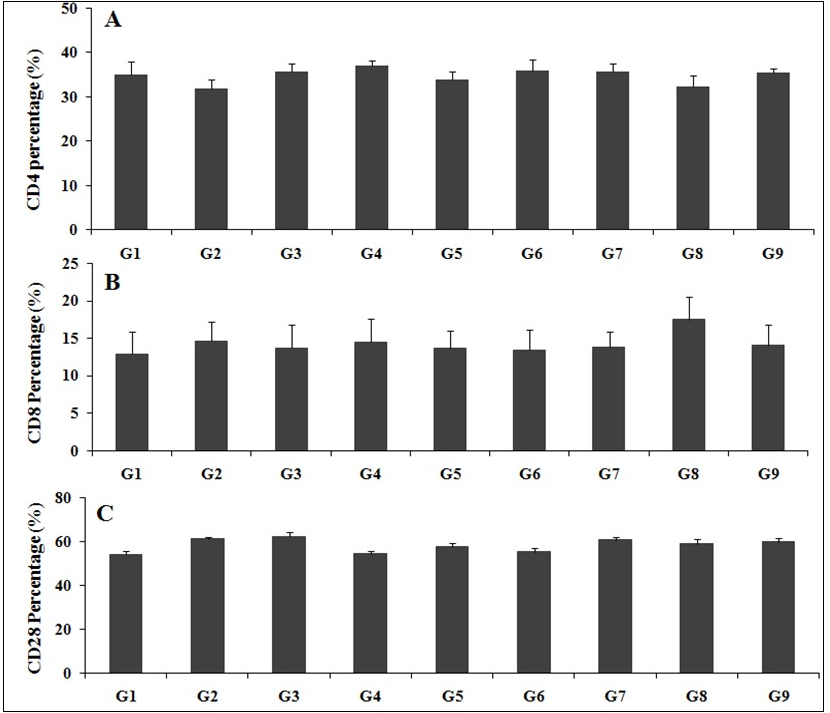 Cellular immunity plays a vital role against various antigens, while CD4+ or T4 cells manage infection control and its spread and CD8+ T lymphocyte T8 cells or CD8+i.e. suppressor or killer cells have the capacity to kill the infected cells or cancerous cells. CD28+ cells are antigen specific cytotoxic T cells, which also plays a vital role in immunity to fight against numerous infections 41. T cells activation and its proliferation play a major role in strong immunity to fight against infections and its associated diseases 42. The present study concluded that Biofield Energy Healing (the Trivedi Effect®) Treatment in test formulation showed a significant improved cellular response, which results in increased number of CD4+, CD8+, and CD28+ cells that would significantly improved the cellular immunity to fight against various infections.

Table 1 showed the result of change in major hematological parameters after treatment with the Biofield Energy Treated and untreated test formulation. However, all the treatment groups showed similar levels, except G5 which was marginally higher than G2. The RBC (106/μL) count in the Biofield Energy Treated test formulation group (G5) was slightly increased i.e., 10.03 ± 0.23 X 106/μL as compared with the disease control group. However, significant increase in the platelet count was reported in G5, G6, G7, G8, and G9 by 40.69%, 27.95%, 26.67%, 38.58%, and 28.28%, respectively compared with the disease control (G2) group. However, the data suggested the change was not statistically significant in the following hematological parameters across all the treatment groups (G3 to G9) including normal (G1) and D-galactose induced aging group (G2), viz. neutrophils, platelets, PCV, MCV, MCHC, hemoglobin, MCH, RDW-CV and RBC.

The general biochemistry after treatment with the test formulation showed statistically non-significant alterations, which were observed in the following ion panel of parameters across all the treatment groups (G3 to G9) including normal (G1) and D-galactose induced aging group (G2), magnesium, sodium, chloride, potassium, calcium and phosphorus. Besides, the level of creatinine was significantly decreased by 32.14% in the G9 group as compared with the G2 group. However, the detailed analysis of biochemical study after oral administration of Biofield Energy Treated and untreated test formulation are presented in Table 2. The study data showed vital role of Biofield Energy Healing Treatment on test formulation against many inflammatory diseases.

Measurement of Glucose and Lipid Biomarkers

Measurement of Hepatic and Cardiac Biomarkers

The test biomarkers used in hepatic and cardiac biomarkers such as serum glutamate oxaloacetate transaminase (SGOT), serum glutamate pyruvate transaminase (SGPT), alkaline phosphatase (ALP) and cardiac enzyme creatine kinase myocardium band (CK-MB), and others biomarkers such as, total bilirubin, albumin, and globulin showed alterations with respect to other groups, the results are summarized in Table 4. Liver toxicity is defined by the hepatic enzymes, and these are considered as the biomarkers for any infection in liver damage 43. Besides, minerals and vitamins were reported with vital importance against hepatic enzymes with protective effect 44, 45. Statistically non-significant increase in CK-MB level was noticed in the group injected with D-galactose (G2) for 8 weeks (244.83 ± 45.66 U/L) when compared to the normal control (G1, 166.44 ± 32.64 U/L). However, no significant change was observed in all the treatment groups (G3 to G9). Besides, no significant change was observed in other tested biochemical parameters such as TB, TP, A, G and A/G. 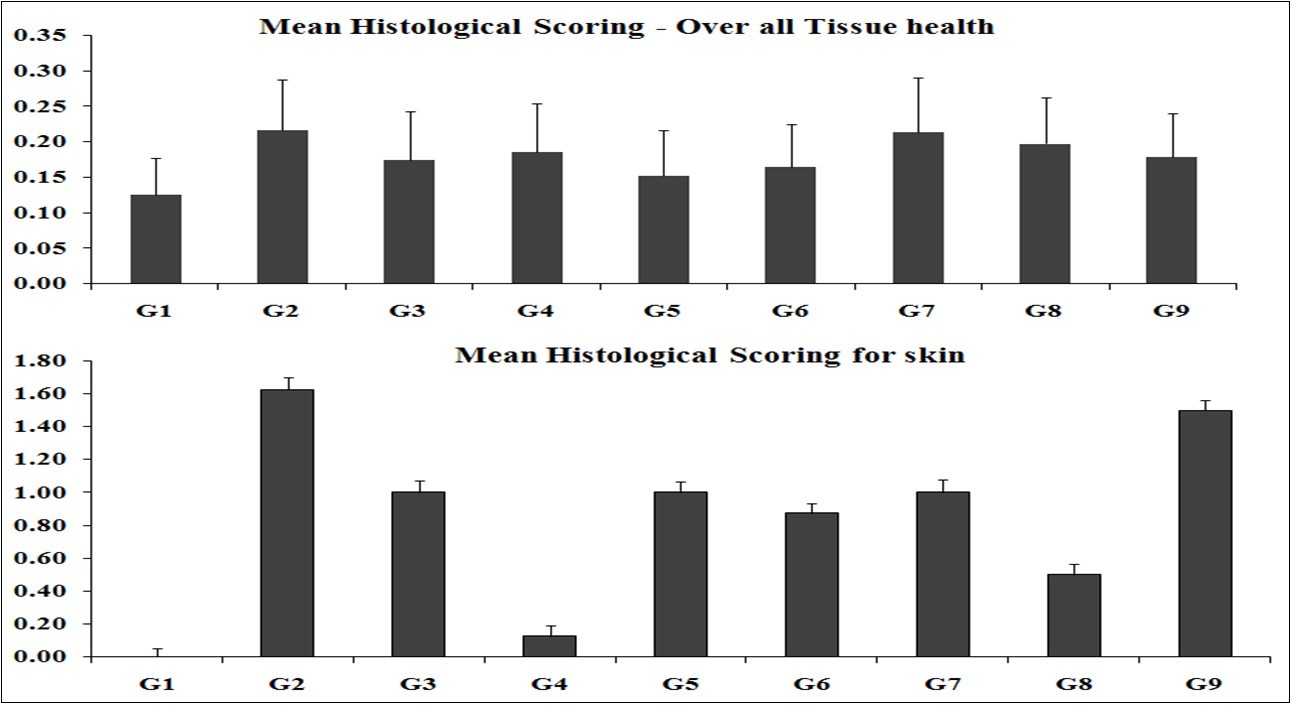 The experimental data suggested significant activity of Biofield Energy Treated/Blessed (the Trivedi Effect®) test formulation for their significant immunomodulatory activity. Based on the current study findings, cellular and humoral immune response was significantly improved. The level of IgG was significantly increased by 2.18%, 10.70%, and 8.03% in the G5, G6, and G8 groups, while IgE was significantly increased by 7.83% and 5.79% in G5 and G8 groups, respectively after Biofield Energy Treatment as compared with untreated test formulation. Blood profile data showed that the platelet count was increased in the G5, G6, G7, G8, and G9 by 40.69%, 27.95%, 26.67%, 38.58%, and 28.28%, respectively compared with the G2 group. Creatinine level was significant decreased by 32.14% in the G9 group as compared with the G2 group. However, animal body weight, feed intake, relative organ weight, and histopathological findings of all the tested groups did not showed any abnormal findings with respect to the safe and non-toxic treatment strategies. Thus, the present study concluded that the novel test formulation and the Trivedi Effect®-Biofield Energy Healing remotely to the animals significantly enhanced the test formulation’s immunomodulatory and antiaging activities. Therefore, the Biofield Energy Treated test formulation and animals per se may act as an effective anti-inflammatory and immunomodulatory product, and it can be used as a Complementary and Alternative Medicine (CAM) with a safe therapeutic index for various autoimmune disorders such as systemic lupus erythematosus, fibromyalgia, Addison disease, Hashimoto thyroiditis, celiac disease (gluten-sensitive enteropathy), dermatomyositis, multiple sclerosis, Graves’ disease, myasthenia gravis, pernicious anemia, aplastic anemia, scleroderma, psoriasis, rheumatoid arthritis, reactive arthritis, type 1 diabetes, Sjogren syndrome, Crohn’s disease, vasculitis, vitiligo, chronic fatigue syndrome and alopecia areata, as well as inflammatory disorders such as irritable bowel syndrome (IBS), asthma, ulcerative colitis, Alzheimer’s disease, Parkinson’s disease, atherosclerosis, dermatitis, hepatitis, and diverticulitis. Further, the Biofield Energy Healing Treated/Blessed test formulation can also be used in the prevention of immune-mediated tissue damage in cases of organ transplants (for example heart transplants, kidney transplants, and liver transplants), for anti-aging, stress prevention and management, and in the improvement of overall health and Quality of Life (QoL).

The authors are gratefully acknowledged to Trivedi science, Trivedi Global, Inc., and Trivedi master wellness and to Dabur Research Foundation (DRF), India for their support.