Journal of Hematalogy and Oncology Research

Current Issue Volume No: 4 Issue No: 2

Monoclonal gammopathy of undetermined significance (MGUS) and chronic myeloid leukemia (CML) are diseases of different lineages. The diagnosis of both MGUS and CML in the same patient is a rare occurrence and has not been reported in much literature.

We describe a 56-year-old man with a history of rheumatoid arthritis incidentally found to have an increase in IgA paraprotein. With less than 10% monoclonal plasma cells on the bone marrow biopsy and absence of hypercalcemia, renal failure, anemia and bone lesions, MGUS was diagnosed. The conventional cytogenetics at the time showed the presence of the Philadelphia chromosome in 30% of metaphases. However, there was no morphologic evidence of CML in the peripheral blood or bone marrow. Patient received no treatment and lost follow-up until 3 years later when a routine CBC showed leukocytosis and thrombocytosis. CML, chronic phase was diagnosed following a bone marrow aspiration and biopsy with Philadelphia chromosome observed in 100% of metaphases. Patient was treated with imatinib and later switched to dasatinib and complete molecular remission was continued to be achieved.

Here we report a case of pre-leukemic CML as an incidental finding during the diagnosis of MGUS. The possible underlying mechanisms of the association are discussed although the exact cause of the coexistence is unclear.

Chronic myeloid leukemia (CML) is a myeloproliferative neoplasm arising from pluripotent hematopoietic stem cells, and is characterized by the translocation of chromosome 9 and 22 (t(9,22)(q34;q11)), which results in the Philadelphia chromosome 1. This translocation creates the fusion protein BCR-ABL1 leading to the constitutively active tyrosine kinase. CML occurs on average 1-2 cases per 100,000 people per year 2. Monoclonal gammopathy of undetermined significance (MGUS), on the other hand, is the proliferation of monoclonal plasma cells, and is clinically presented as increased serum monoclonal protein known as M spike. MGUS presents in about 3% of the general population in patients older than 50 years of age and 5% of those older than 70 years of age 3. MGUS is an asymptomatic premalignant disorder that can progress to plasma cell neoplasms (such as plasma cell myeloma (PCM, also called multiple myeloma), solitary plasmacytoma and plasma cell leukemia) or overt lymphoma/Waldenstrom macroglobulinemia based on the type of M protein secreted. Non-immunoglobulin (Ig) M MGUS and light chain MGUS typically progresses to plasma cell neoplasms while IgM MGUS progresses more commonly to lymphoma and Waldenstrom’s macroglobulinemia than to plasma cell neoplasms. MGUS can also progress to amyloidosis. In this case report, we describe a patient with a history of MGUS and detected Philadelphia chromosome at the time of the MGUS diagnosis developed CML three years later. Cases of simultaneous occurrence of plasma cell neoplasms and CML have been seldom reported in literature, but the co-existence of pre-clinical or pre-leukemic CML (pre-CML) and MGUS is a very rare event and has yet been reported.

A 56-year-old man with a history of rheumatoid arthritis was found to have a mildly increased IgA paraprotein. The complete blood count (CBC) was within normal limits, as follows: white blood cells (WBC) 6.5 K/cumm, red blood cells (RBC) 4.57 M/cumm, hemoglobin 13.9 g/dL, platelets 269 K/cumm. Peripheral blood smear showed that differential cell counts were within normal ranges with normal cell morphology. A bone marrow aspiration and biopsy was performed (Figure 1). A 500-nucleated cell count showed: granulocytes 53.0%, eosinophils 2.8%, monocytes 1.4%, erythroid precursors 26.8%, lymphocytes 7.0%, plasma cells 8.2%, and blasts 0.8%. The bone marrow clot and biopsy demonstrated a normocellular marrow with trilineage hematopoiesis, myeloid to erythroid ratio of 2:1, slightly increased plasma cells, and no excess blasts. Immunohistochemistry (IHC) stains performed on the bone marrow biopsy and clot showed 5-10% CD138 positive plasma cells which were also positive for lambda immunoglobulin light chain; only rare plasma cells expressed kappa light chain. Due to lack of hypercalcemia, renal failure, anemia or bony lesions, the findings were consistent with MGUS. Congo red stain was done on the bone marrow biopsy and amyloid deposits were not seen. Interestingly, the cytogenetic analysis of the bone marrow aspirate showed the reciprocal translocation between chromosome 9 and 22, the Philadelphia chromosome, in 30% of metaphases {46,XY,t(9;22)(q34;q11.2)(6)/46,XY (14)}. Further studies by fluorescence in situ hybridization (FISH) revealed positive fusion signal for probes BCR/ABL1 dual fusion in 23% of interphase unsorted cells, but not in the sorted CD138-positive cells. FISH assays performed on the CD138-sorted cells showed monosomy 13 and partial deletion of IGH but were negative for t(4;14), t(14;16), t(14;20) and t(11;14).

Treatment was not recommended for MGUS and the patient was lost to follow-up. Three years later, on a routine lab work, the patient was found to have leukocytosis (65.5 K/cumm) and thrombocytosis (602 K/cumm). The remaining CBC was within normal reference ranges (hemoglobin 12.1 g/dL, RBC 4.29 M/cumm, red cell distribution width 18.2%, and mean corpuscular volume 91.5 fL). Peripheral blood smear showed a marked leukocytosis with left-shifted neutrophilia, eosinophilia, basophilia, and rare circulating blasts, suggestive of CML. The peripheral blood was sent for BCR-ABL1 gene rearrangement by Quantitative PCR and showed p210 BCR-ABL1 fusion transcript, confirming the diagnosis of CML. Bone marrow aspiration and biopsy was then performed. The bone marrow aspirate (Figure 2A) showed a marked granulocytic hyperplasia with a 500-nucleated cell count as follows: neutrophils and precursors 72.8%, eosinophils and precursors 6.0%, basophils and precursors 5.6%, erythroid 8.8%, lymphocytes 1.4%, plasma cells 1.2% and blasts 4.2%. The bone marrow trephine biopsy sections (Figure 2B) showed markedly hypercellular bone marrow with an overall fat to cell ratio of 5:95 and marked granulocytic hyperplasia with marked erythroid hypoplasia (myeloid to erythroid ratio > 10:1). Megakaryocytes were increased in number with frequent “dwarf” megakaryocytes containing monolobated or hypolobated nuclei (Figure 2, A-B). Blasts were <5% of all bone marrow nucleated cells, confirmed by CD34 IHC stain (Figure 2, C). TdT IHC stain was virtually negative (not shown). IHC stains performed on both the bone marrow biopsy and the clot showed CD138-positive plasma cells were less than 5% (Figure 2, D), majority of which were also positive for IgA (not shown) and lambda immunoglobulin light chain ((Figure 2, E). Only rare plasma cells were positive for kappa light chain ((Figure 2, F), IgG (not shown), or IgM (not shown). These results support CML in chronic phase (CP-CML) and plasma cell dyscrasia with <5% IgA lambda monotypic plasma cells. The patient was started on imatinib, a tyrosine kinase inhibitor, for treatment of CML; however, even with compliance, BCR-ABL1 fusion transcript was still detected after 1 year. The patient was switched to dasatinib and BCR-ABL1 fusion transcript was undetected till this day. 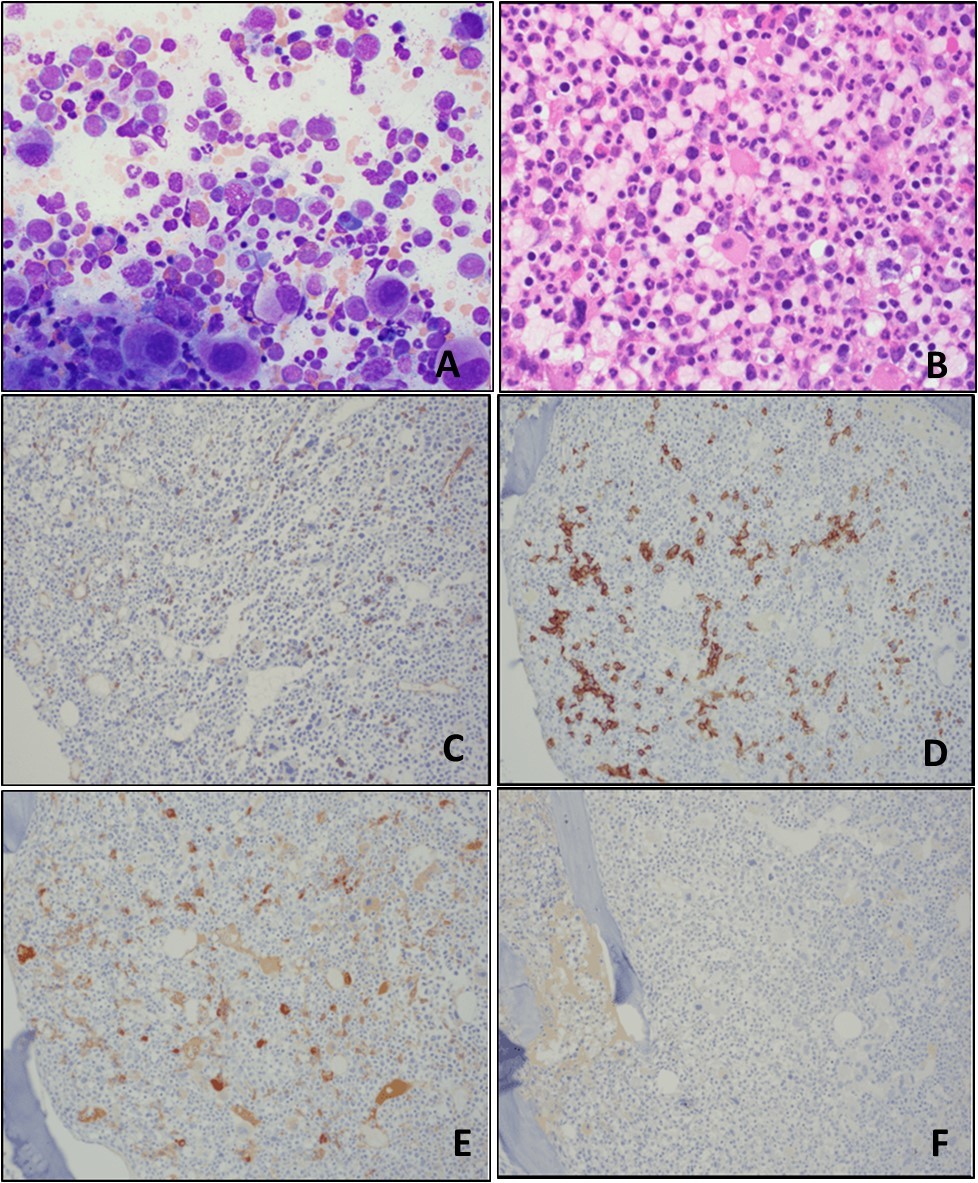 The MGUS progressed to smoldering PCM 4 years after initial diagnosis of MGUS with 10-20% IgA lambda plasma cells in the bone marrow.

Plasma cell neoplasms and CML are developed from two different cell lineages and the coexistence of these two diseases in the same patient is uncommon. There are currently about 30 case reports of co-diagnosis of PCM and CML 4, but reports of co-occurrence of MGUS and CML are even rarer in the literature 5. A recent cross-sectional study conducted by Berger et al. showed MGUS in 6% and smoldering PCM in 2% of 100 CP-CML patients during or after TKI treatment, which are higher than the prevalences of MGUS and PCM in the general population 6. However, larger studies and extended follow-up are necessary to elucidate the true relationship of these entities.

In CML, the Philadelphia chromosome besides being found in the granulocytes is also present in monocytic, erythroid, megakaryocytic, and lymphoid cells, supporting the concept that CML arises from a pluripotent hematopoietic stem cells. During the blast phase, 25% of CML can have blasts of the lymphoid lineage, suggesting a relationship between myeloid and lymphoid cells and raising the possibility of a common clonal origin 7. Therefore, although the association of these diseases could be coincidental, an origin from a common progenitor of the two has been proposed. The role of BCR-ABL fusion in the generation of plasma cell clones in patients with co-existing CML and PCM was evaluated by FISH analysis by Schwarzmeier and coauthors 8. Their result showed no evidence of BCR-ABL co-hybridization signals in plasma cells, which argues against an essential role of BCR-ABL fusion in the emergence of the plasma cell clone. Similarly, in our case, the BCR/ABL1 fusion was detected only in unsorted bone marrow cells, but not in sorted CD138-positive plasma cells, further questioning the common progenitor theory. In some cases, CML preceded PCM, and the use of imatinib, a tyrosine kinase inhibitor, in the treatment of CML was observed to promote the development of PCM through activation of Erk1 and Erk2 Mitogen Activated Protein Kinases (MAPKs) 9. On the other hand, radiotherapy, commonly used in the management of plasma cell tumors, has been shown to induce t(9;22) translocation 10, 11.

Interestingly, in the present case, t(9;22)(q34;q11.2) BCR-ABL1 fusion was detected at the time when MGUS was diagnosed, without any other peripheral blood or bone marrow evidence of CML. BCR/ABL1 transcripts have been detected in peripheral blood from healthy individuals 12, 13, 14. However, the proportion of progression to CML has not been studied in these people. Therefore, although CML is characterized by BCR/ABL1, the biologic significance of low level BCR/ABL1 is unclear. Our patient developed CML, chronic phase three years after, suggesting that he had pre-CML at the time of MGUS diagnosis.

The presented case has two points of interest: 1) the association in the same patient of MGUS with CML, which is a rare event; 2) CML was initially detected in a preleukemic stage (pre-CML), which is also a rare situation. Theories have been proposed to explain the coexistence of CML and plasma cell neoplasms, including a common clonal origin and the role of therapy. However, the exact cause of this association is unclear.