Current Issue Volume No: 1 Issue No: 2

Coccidiosis in poultry is caused by protozoan parasites of the Eimeria species, which is responsible for worldwide economic losses. The aim of this study was to evaluated the therapeutic effect of NeemAzal® on Eimeria tenellain broiler Chickens as compared to Amprolium as a standard anticoccidial drug. A total of One Hundred and Sixty (160) broiler chicks were purchased, acclimatized and randomly divided into 4 groups (G1, G2, G3 & G4). G1 non-infected, non-treated (negative control), (G2) infected with 20000 E. tenella oocysts (positive control), (G3) infected and treated with Amprolium (Standard, 7 mg/kg b.w. for 5 days) and (G4) infected and treated with NeemAzal®200 mg/kg b.w. for 5 days). Evaluation was by clinical signs, performance data (weight gain, oocyst shed/gram faeces (OPG) and histopathology of the Caecum, Liver and Kidney. The data showed that birds infected with E. tenellahad an output of 1.3×105±3,333 oocysts per gram faeces on day 5 post inoculation. This output is significantly decreased to 0.37×105±3,111 oocysts in neem-treated birds. Infection with E. tenellainduced marked histopathological alterations in the caecum in the form of inflammation, vacuolation of the epithelium, and destruction of some villi. NeemAzal® decrease body weight loss of infected chickens. Moreover, the number of goblet cells stained with Hematoxylin and Eosin (H&E) within the infected villi was significantly lowered (P≤0.05). The results revealed that chicks of G1 had the best performance data compared to G2, G3& G4. In G3 & G4 there were a remarkable improvement in the data on performance, clinical signs, gross and microscopically caecal lesions compared to G2. Amprolium (G3) was shown to be superior to NeemAzal® (G4) compared to G2. NeemAzal® could be a good alternative for use as a coccidiostat to supplement the expensive anti-coccidiostats in the market.

Coccidiosis is a major parasitic disease of poultry caused by an Apicomplexan protozoan belonging to the subclass Coccidia, family Eimeriidae, and genus Eimeria 1. The disease has significant economic impact on the poultry industry causing high®® mortality, poor growth, decreased productivity, and high medical cost 2. Anticoccidial drugs at subtherapeutic doses in feed, are commonly used to prevent and treat coccidiosis. However, indiscriminate and long-term use of anticoccidial drugs has led to the emergence of drug resistant parasites and presence of drug residues in chicken products raising concerns about public health and food safety 3, 4. According to Yang et al.5, Coccidiosis vaccines are an alternative means to prevent coccidiosis. However, efficacy, safety, and cost-effectiveness are still challenges for anticoccidial vaccine use in poultry 6. Consumers and poultry farmers around the world have voiced concerns about the use of present anticoccidial agents 5. Therefore, there is an expedient need for an alternative approach to prevent and treat avian coccidiosis. This necessitates an examination of the potential of natural products from plant extracts. In recent time, various researchers have tested several plants for anticoccidial activity in chickens 4, 5, 7, 8, 9, 10. Azadirachta indica has been reported to possess anticoccidial properties and has been used to combat avian coccidiosis. This property has been demonstrated by its ability to reduce oocyst count 11, 12, inhibit inflammation 13, and enhance erythropoiesis 14, 15. The pathogenesis of coccidiosis is associated with oxidative stress caused by increased generation of reactive oxygen species due to activities of the parasite as well as the host immune system causing a depletion of the indigenous antioxidant enzymes such as glutathione reductase (GSH) level and increased lipid peroxidation of cells in the intestinal linings and surrounding tissues. Azadirachta indica (AI) has free radical scavenging ability as well as cellular immune-modulatory properties in mice 16, 17 and human colorectal cancer 18. Tipu et al. 19 showed that combinations of herbs used against coccidiosis are effective and an economical alternative for prophylactic anticoccidial medication. Azadirachta indica administered at a dosage of 200, 400, 800, and 1600mg/kg in broiler chickens for 4days showed 800mg/kg to be the most effective dosage 20. The awareness by the consumers to avoid chemotherapeutics, the high development costs and low profits have not encouraged the pharmaceutical industry to develop new anticoccidial products 21. Thus, alternatives are therefore progressively and currently been sought. Reports exist on the use of a variety of herb extracts alone or as combination that have proven to be effective in the war against coccidiosis. A number of natural herbs have been tested as anticoccidial dietary additives such as Artemisinin was isolated from Artemisiaannua, is a naturally occurring endoperoxide with antimalarial properties 22. It has been found effective in reducing oocyst output from both E. acervulinaand E. tenella infections when fed at levels of 8.5 and 17 ppm in starter diets 22. In addition, the use of Mormodicabalsamina fruit extract against E. tenellainfection in broiler Chickens has been reported in the same environment 23 NeemAzal® is a biodegradable product from Azardiractaindica (Neem Tree Seed) and the biosynthesis of azadirachtin which is the major component of NeemAzal®is thought to involve tirucallol, a tetracyclic triterpenoid, and a series of oxidation and rearrangement reactions which produce finally, the tetranortriterpenoid azadirachtin family 24. The in-vivo testing of NeemAzal®asa biopesticide from Trifolio-M Lanau, Germany against ticks which are ectoparasites was carried out by few researchers in Nigeria with some recorded successes 24, 25, 26, 27. Till date, no report yet on the use of NeemAzal® to control poultry coccidiosis, hence the motivation to embark on this study.

This study was be carried out in Jos Plateau State which is located in Nigeria’s middle belt, with an area of 26,899 square kilometres and an estimated population of about three million people. It is located between Latitude 9o 0’ to 9o 40’ North and longitude 8o 30’ to 10o 30’ East of the equator. The altitude ranges from around 1,200 metres (about 4000 feet) to a peak of 1,829 metres above sea level in the Shere Hills range near Jos. Years of tin mining have also left the area strewn with deep gorges and lakes. Though situated in the tropical zone, a higher altitude means that Plateau State has a near temperature climate with an average temperature of between 18 and 22oC. Harmattan winds cause the coldest weather between December and February. The warmest temperatures usually occur in the dry season months of March and April. The mean annual rainfall varies from 131,75cm (52 in) in the southern part to 146cm (57 in) on the Plateau. The highest rainfall is recorded during the wet season months of July and August 28.

Apparently healthy day-old broiler chicks were obtained from a hatchery in Jos, Nigeria, and brooded under standard conditions for three weeks before commencement of the study. The chicks were fed standard pelletized broiler starter feed (Vital Feed® Grand Cereals, Nigeria, Plc., Jos, Nigeria) and water ad libitum. Birds were housed in individual cages with proper lighting and heat. The birds were vaccinated against infectious bursal disease (IBD) and Newcastle disease virus with IBD and Lasota vaccines, respectively, using NVRI, Vom Plateau State vaccines. All experiments were conducted in accordance with the Principles and Guide for the Care and Use of Laboratory Animals29, 30, 31and approved by the Animal Ethics Committee of NVRI, Vom Plateau State

A total of One Hundred and Sixty (160) broiler chicks were purchased, acclimatized and randomly divided into 4 groups (G1, G2, G3 & G4). Chickens were weighed and each infected with sporulated oocysts 20000 (1ml) at a single oral gavage 11. G1 non-infected, non-treated (negative control), (G2) infected with E. tenella (positive control), (G3) infected and treated with Amprolium (Standard, 7 mg/kg b.w. for 5 days) and (G4) infected and treated with NeemAzal® (200mg/kg b.w. for 5 days). Daily collection and screening of feces for oocyst presence and count were carried out. Birds were also monitored for clinical signs of coccidiosis. After establishment of the infection (7 days after inoculation), treatment commenced by oral gavage of NeemAzal®. The experiment included control groups, negative and positive, treated with distilled water and amprolium (Amprolium 250 WSP, Kepro® B.V., Holland), respectively. All treatments lasted for five (5) days which is the usual period of chemotherapy for coccidiosis using the standard drug amprolium. At the end of the experiment, chicks were sacrificed by cervical dislocation tissues were collected in 10% neutral buffered formalin for histopathological study.

Source of the Drug

NeemAzal® used in this experiment is an organic product from Trifolio-M Company Lanau, Germany (25)

Evaluation of faeces for the oocyst per gram (OPG) counts was performed using modified McMaster’s technique 29.

The harvested tissues (Cecum for therapeutic efficacy, Kidney and liver for the safety study) were rinsed with phosphate buffered saline (PBS) and blotted with filter paper and weighed. They were then chopped into bits and homogenized in ice using homogenizing buffer (0.1 M phosphate buffer, pH 7.4) at ratio of 1: 4 w/v. The resulting homogenate was centrifuged at 10,000 g for 15 minutes at −4∘C to obtain the post mitochondrial fraction.

Tissue sample (Cecum) was harvested from the infected and treated birds immediately after sacrifice, fixed in 10% neutral buffered formal saline, embedded in paraffin wax, sectioned at 5𝜇 thickness, cleared with xylene, and mounted using mountant then stained with haemotoxylin and eosin (H&E) stain 31, 32.

All feacal samples were subjected to a modified McMaster technique and oocysts per gram feaces (opg). The efficacy of NeemAzal® was evaluated on the basis of bloody faeces and oocyst output and weight gain using lesion scores and Chi square 33.

The Effect of NeemAzal® on Oocyst Count and Weight Gain (Efficacy Study) at a dose of 200mg/kg birds treated with NeemAzal® a statistically significant (P≤0.05) increase in weight gain was recorded among treated groups (Figure 1 & Figure 2). During the first 3 days of infection, there was no fecal output of oocysts. On day5 p.i., the output differed between NeemAzal® treated and non-treated chickens. In the latter, the number of excreted oocysts reached approximately 1.3×105 per gram feces (Figure 2). 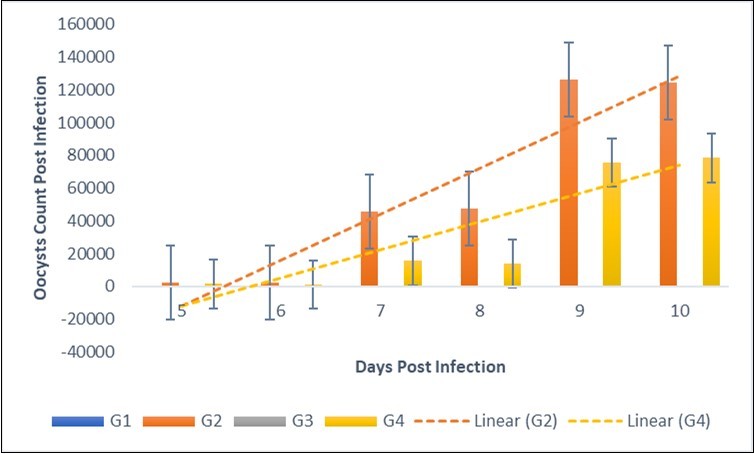 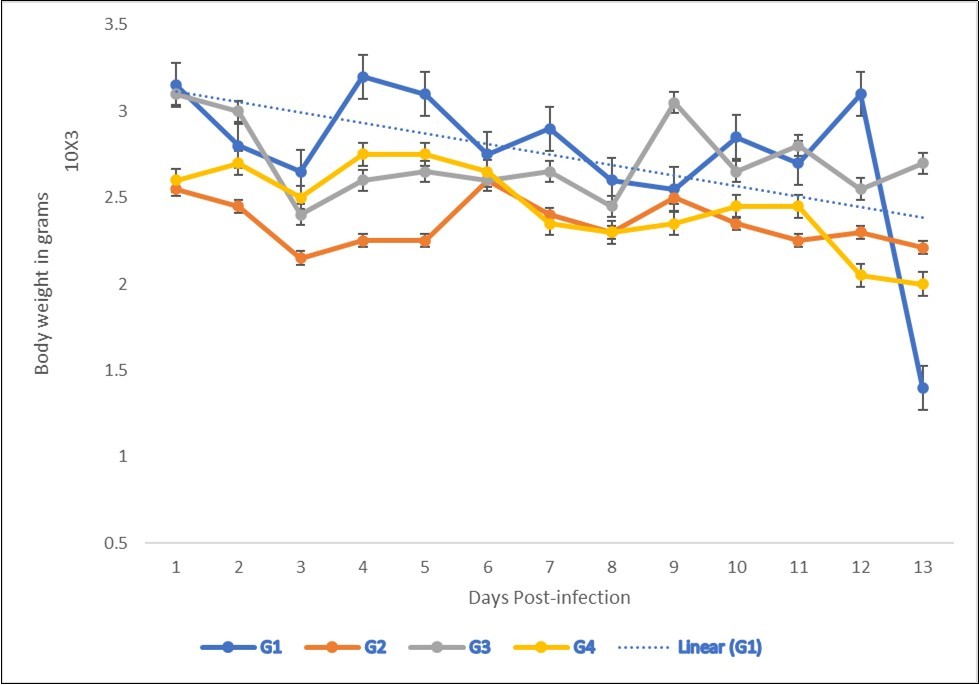 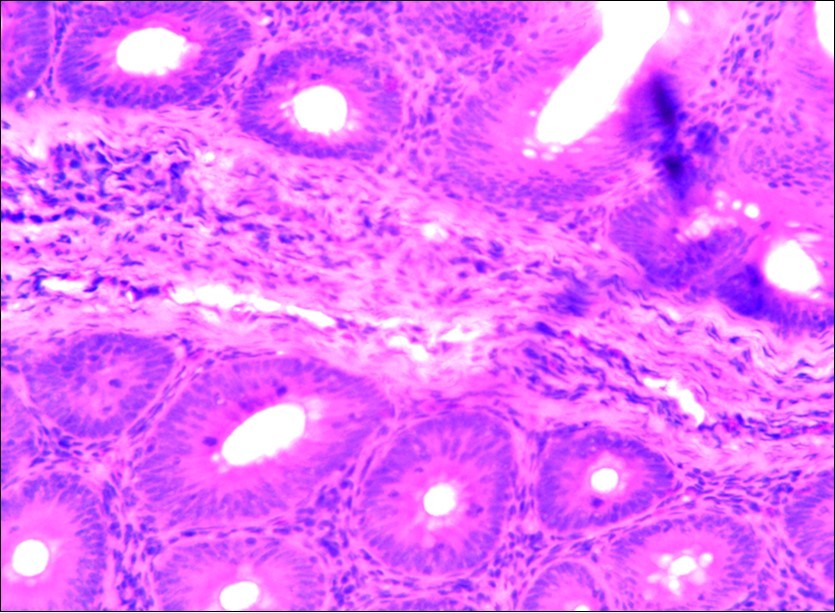 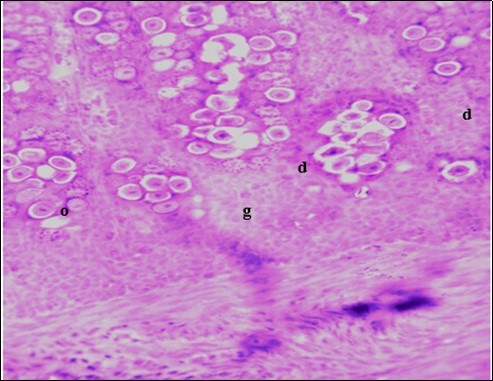 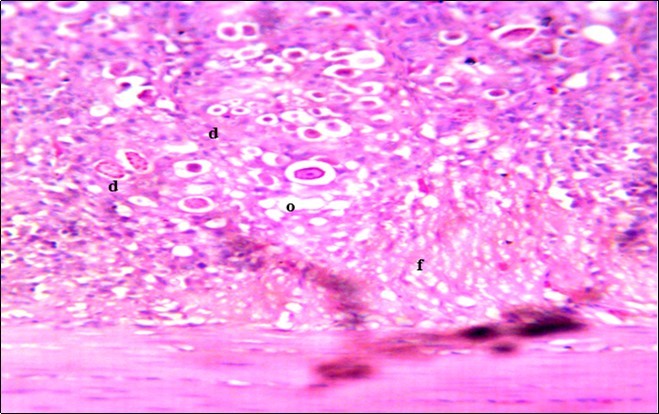 In addition, the generalized degeneration of the caecal glands, moderate numbers of gametocytes within the glandular regions with fibrosis which underscores reparative process in response to injury evoked by coccidiosis in the chicks which was perhaps brought about by the antioxidant and chemotherapeutic effect of NeemAzal®. The observed increase in RBC and hemoglobin concentration (Table 1) is indicative of the erythropoieticability of NeemAzal®, which is beneficial since the Eimeria parasite in the epithelia of the intestines causes bloody diarrhea and consequently anaemia. This finding is in consonance with 15 who reported an anti-anaemic effect of Khaya senegalensis on phenyl hydrazine-induced anaemia in rats. If the results of this study are juxtaposed with the results of the previous studies on potent antioxidant, hepatoprotective and mitigative role of methanolic extracts of Azadirachtaindica,in both natural and experimental infection with Eimeria species and can be deduced that, NeemAzal® could be said to be a potent antioxidant, chemotherapeutic and tissue protective agent. This study also answered a question on further study advocated to determine the maximum safe levels of neem supplementation because the higher doses, due to its bitterness, may show adverse effects on feed intake which will change the performance parameters of birds (Figure 6 and Figure 7) . Light microscopic inspection of hematoxylin and eosin-stained sections revealed that the epithelial cells of the Cecum were infected by E. tenella(Figure 3 and Figure 4). The results of the safety study showed that exposure of chickens to NeemAzal® at 200mg/kg body weight did not alter the histoarchitecture of liver and kidney (Figure 6 & Figure 7) which is similar to the work conducted in the same environment by a group of Scientists 34. It is therefore recommended that NeemAzal® could be used as a coccidiostat to replace the expensive anti-coccidiostats in the market. 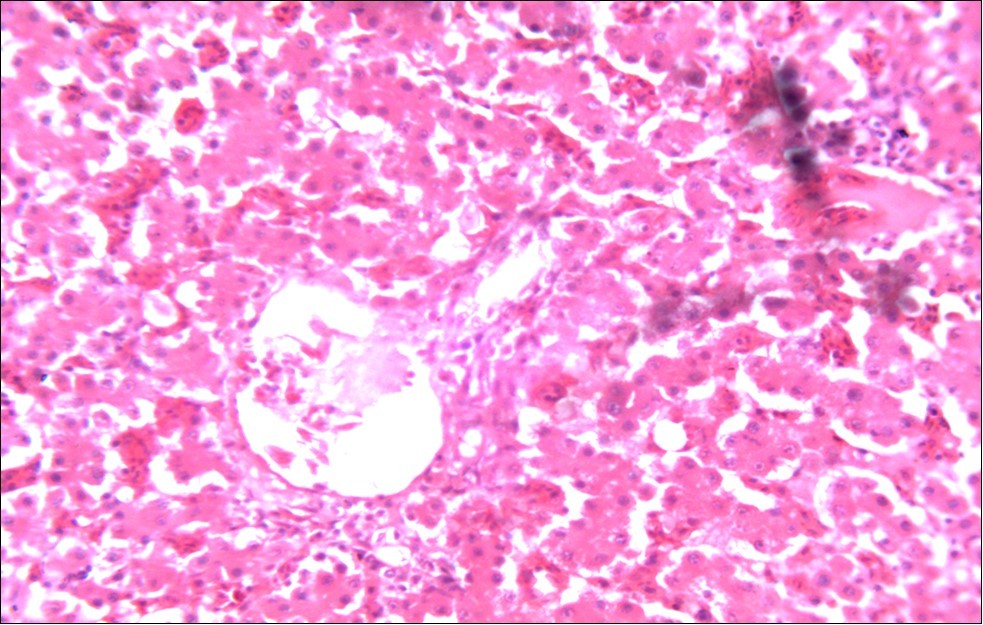 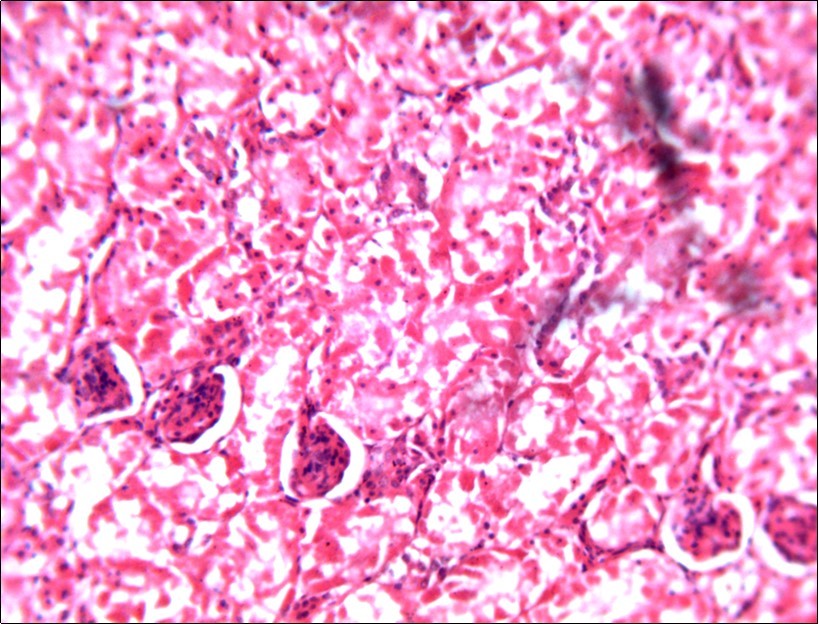 This study shows for the first time that NeemAzal® could be used possibly as a cheaper alternative in the treatment and control of coccidiosis and as a feed additive in the poultry Industry. Further investigative study is advocated to established its protective potential in layers and other animal species.