Current Issue Volume No: 6 Issue No: 1

This study aimed at determining improved latrine coverage and associated factors among rural community in Gicumbi district. A cross-sectional study was employed using mixed methods with quantitative and qualitative data collection approaches. The quantitative approach of data collection method was conducted and then qualitative approach followed. A structured questionnaire was used to collect quantitative data and Focus Group Discussions (FGDs) was conducted to collect the qualitative data. The study population consists of household heads or their representatives and key informants from the study area of Gicumbi district. For quantitative the total sample size was 236 households while for qualitative data, a total of three FGDs with eight (8) participants was conducted among twenty four (24) rural community members of Gicumbi district. Raw data from the questionnaire were entered into EPI data and transported into SPSS version 22 for analysis. Descriptive statistics was used to tabulate and describe the data. The strengths of the associations were determined with multiple logistic regressions. The results shows that 69.1% of respondents were male, 30.1% were farmers, 16.9% had formal employment while 57.2% completed secondary education. The prevalence of improved latrine in Gicumbi District was 65.3%. Tertiary education was also 4.3 times more likely to have improved compared to those who did not have formal education (AOR=4.3CI: 95%: 1.027-7.032. P=0.005). Respondents with average monthly income Between 50,000 and 100,000 Rwfs are 2.7 times more likely to have improved latrine (AOR=2.7 CI at 95%:1.009-4.120, P=0.022).

Despite encouraging progress on sanitation, most of Sub-Saharan Africa did not meet the MDG sanitation target. In 2015 it was estimated that 2.4 billion people globally still use unimproved sanitation facilities. Of these, an estimated 1 in 8 (946 million) people still practice open defecation worldwide 1.

Globally, 15% of the world’s population do not use improved latrine facilities forcing over 1 billion people to resort to open defecation. Overall, the global latrine coverage as at 2011, was estimated to be 64% implying that the world was set to miss the 75% sanitation MDG target by more than half a billion people if the current trends continued 2 .

Sub-Saharan countries including Rwanda still have the significant numbers of people living in unimproved hygiene and need rapid improvement of sanitation which calls for details research 6. To improve sanitation and hygiene throughout the country, Ministry of Health settled the goal that every household should have access to latrine and large-scale interventions were implemented to increase sanitation coverage 7.

The study was undertaken in Gicumbi district, Rwanda. as indicated in the area map in figure 1, the study location has 21 sectors each with one village. The district lies on longitude 30 04’3.00”E and latitude -1 34’ 34.68”S. Altitude in the district ranges from 500m to 2,500m above sea level.

The sample size for the study is determined using the sample size calculation designed by Fisher et al. (1998) because the target population is greater than 10,000 as detailed below:

z= Degree of confidence at 95% that corresponds to1.96

p= Expected prevalence (0.19) of latrine coverage in Rwanda was 19%

The total sample size was 236 households

A total of three FGDs with eight participants were conducted among 24 rural community members of Gicumbi district.

For quantitative, data was collected using a pretested semi-structured questionnaire which was in English and translated to Kinyarwanda. It was administered to the study participants with the help of 2 trained research assistants and the principal investigator. It took approximately 30 minutes to administer the questionnaire. In this study, latrine coverage was determined through the proportion of households having ownership of an improved latrine facility.

For qualitative, data was collected using FGDs (appendix 4 for community member). The FGDs members were interviewed on perception of community members regarding improved latrine use. The discussions were recorded by using telephone recorder and the interviews last between 30-40 minutes.

For quantitative, questionnaire was administered by trained assistants after receiving consent from each study participants. Participants were recruited after consent is sought and obtained from each individual. At the end of each day the researcher cross checked the questionnaire for completeness. Only completed questionnaires were considered for data entry.

For qualitative, FGDs guide was used in collecting data and moderator was the researcher herself. Qualitative data was done using telephone recorder.

Raw data from the questionnaire were entered into EPI data and transported into SPSS version 20 for analysis. Descriptive statistics was used to tabulate and describe the data, score assessment of all variables related to improved latrine use were done in order to find latrine coverage and Bivariate analysis to assess the association between independent and dependent categorical variables were carried out using Chi square (X2). The strengths of the associations were determined with multiple logistic regressions. Inference was made using a 95% confidence interval and a p-value < 0.05. The results were presented in frequency, cross tabulation tables, and pie charts.

The qualitative data was analyzed thematically. Each interview transcript was assigned a unique key informant identifier. The transcripts were sending back to the key informants for validation purposes. The key issues in all the transcripts was coded and grouped into similar concepts. The concepts then be categorized into themes and a short report were produced for each discussion topic. The qualitative data was presented in form of quotes.

The consent of the respondents was sought and obtained before the administration of the questionnaire. The participants were informed that their participation is voluntarily and they could withdraw from the study at any time without giving any reason. The findings were treated with utmost confidentiality and it is for the purpose of this research only. The objective and result of the study was explained to the subjects of research participants. Then, the participants were informed that the procedure used not pose any potential risk and their identities and personal particulars were kept strictly confidential. Approval to carry out the study was sought and obtained from Mount Kenya Utableniversity (MKU).

All 236 households selected as a sample participated in the study, this explains why the response rate was 100%.

The table above (Table 1) desplays the information on demographic characteristics of respondents. The results shows that 69.1% of respondents who reported that they were household heads were male while 30.9% were females.

The research further more sought to find out the occupation status of respondents and categorized into Formal employment (16.9%) , Informal employment (19.5%) , Business/Trading 20.8% , Livestock keeping (11.9%) ,Agriculture (30.1%) ,and others (0.8%) who cited the hand to month work for surviving.

The Improved Latrine Coverage Among Rural Community in Gicumbi District

The study further established the prevalence of latrine use in rural community of Gicumbi district, having improved latrine was to facilitate for the safe disposal of human faeces and urine without slab and to also know the proportion of households having ownership of an improved latrine facility among community under the study. 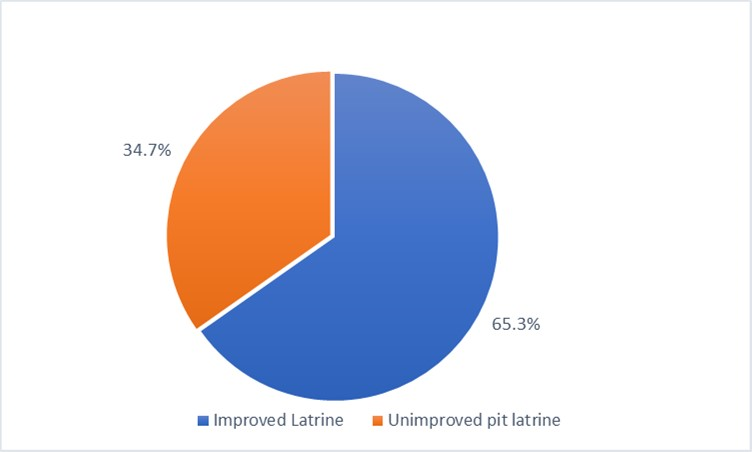 To sort out the factors associated with improved latrine coverage among the respondents in Gicumbi district, Bivariate analysis was conducted through a chi-square test in SPSS to find out the interdependence among independent variables and the outcome variable of interest which is the possession of improved latrine.

Chi-square test statistic was observed and P-Value was viewed to compare it to significance level (0.05) so as to take the decision against the null hypothesis (there is no association between any independent variable and the possession of improved latrine).

The table above (Table 2) shows the results from a bivariate analysis between socio-economic characteristics of respondents and the improved latrine coverage, chi-square test of independence was used to test the relationship, P-Vale (p<0.05) was considered significant.

Results from bivariate analysis showed that only Age and occupation of respondents were found statistically, significantly associated with improved latrine with the P-Values 0.041, 0.008 respectively.

Multivariate analysis estimates the logistic model with independent variables significantly associated (Age and Occupation) with outcome variable and the outcome variable (Improved, Unimproved latrine), the results from Binary logistic regression are shown in the table 3 below.

The study showed that 154 (65.3%) had improved latrine in rural community of Gicumbi district, this proportion is lower that the national coverage (81.3%) in rural areas according to integrated household and living condition survey (EICV, 2016-2017).

In this study, findings from bivariate analysis showed that Education level, Age and skills for constructing improved latrine and average monthly income of household per month are significantly related to improved latrine coverage. The increase in average income earned by household increase the likelihood of the household to own improved latrine, this was also found in the study conducted by 10, in rural communities of Bahir Dar Zuria district in Ethiopia on 608 households found that availability of latrines was twice higher in households with an income of 5000 or more Ethiopian Birr (1USD = 17.5 Ethiopian Birr) than those who hand an income less than 5000 Birr.