Current Issue Volume No: 2 Issue No: 4

Retrospective descriptive study of all clients seen at a gbv clinic over a sixteen months period.Data was obtained from case records and clinical presentations were entered into excel. Data analysis was done usingIBM SPSS Statistics for Windows, version 25. The results were presented in frequency tables and graphs

Of 86 clients studied, 56(65.1%) were of pediatric age (< 18years) while 30(34.9%) were adults with a mean age of 18.33+11.64(range 1-64years).72(82.6%) belonged to the low social class. Physical abuse in the forms of battering, human bite, walking and sitting disturbances, hearing loss possibly from slapping or hitting and red eye possibly from trauma on the eye, constituted 37.6% of the clinical presentations. Other presentations were; sexual abuse in the form of forced sex which constituted 34.9%, while gynaecological / obstetrics presentations in the forms of bleeding per vagina, pregnancy due to forced sex and vaginal pain made up 13.9%. Emotional/psychological abuse was observed in all clients irrespective of their different presenting complaints.

While various forms of physical abuse were common, emotional abuse was present in all clients but masked probably due to prioritization of physical injuries. Therefore we recommend that all GBV survivors be screened for psycholocal abuse and psychotherapy given.

Gender based violence (GBV) according to United Nations, is any act that is likely to or result in physical, sexual or psychological harm or suffering to women including threats or acts of coercion, arbitrary deprivation of liberty private or public in the family or community1.It has also simply been defined as any harmful act that is perpetrated against a person’s will and that is based on socially ascribed (gender) differences between males and females,2. It is a grave human right violation and has the capacity to cause lifelong injury and trauma to its victims/survivors.3,4 Various types of GBVexist namely; physical violence, sexual violence, domestic violence, stalking, human trafficking, emotional and psychological violence, harmful traditional practices and socio-economic violence.5GBV is not restricted to a particular region. It is a global problem occurring in developed and developing countries with prevalence rates ranging from 27.99% to 58.8% depending on the context and prevailing circumstances.2,6 Several laws and policies have been put in place to curb this.5, In Nigeria the Violence Against Persons Prohibition Act 2015 (VAPP) Law stipulates a 12 years jail term for perpetrators of GBV and harmful traditional practices (HTPs). However few states have implemented the act.7

The study was carried out at the One stop centre for women and girls (GBV Clinic), National Obstetric Fistula Centre (NOFIC) Abakaliki Ebonyi State Nigeria. This centre runs a daily clinic for women and girls with all forms of gender based violence.

A sixteen months retrospective descriptive study of all clients seen at the centre between November 2020 and February 2022.

The study population included all clients seen at the study period irrespective of their age. Relevant information such as client’s presenting complaints, were obtained from the case notes and entered into a profoma. The social classification of the patients was by Olusanya's classification.12

All clients seen at the given period were included

There werea total of 86 clients studied. Of the study population, 56(65.1%) were of pediatric age (< 18years) while 30(34.9%) were adults. The mean age of clients was 18.33+11.64(range 1-64years). Gender was all female.72(82.6%) belonged to the low social class, 9(10.5%) and 5(5.8%) to the middle and lower social class respectively (figure 1). Physical abuse in the forms of battering, human bite, walking and sitting disturbances, hearing loss and red eye constituted 37.6% of the clinical presentations, sexual abuse in the form of forced sex constituted 34.9%, while gynaecological / obstetrics presentations in the forms of bleeding per vagina, pregnancy due to forced sex and vaginal pain made up 13.9%. These are represented in table 1 and Figure 2. 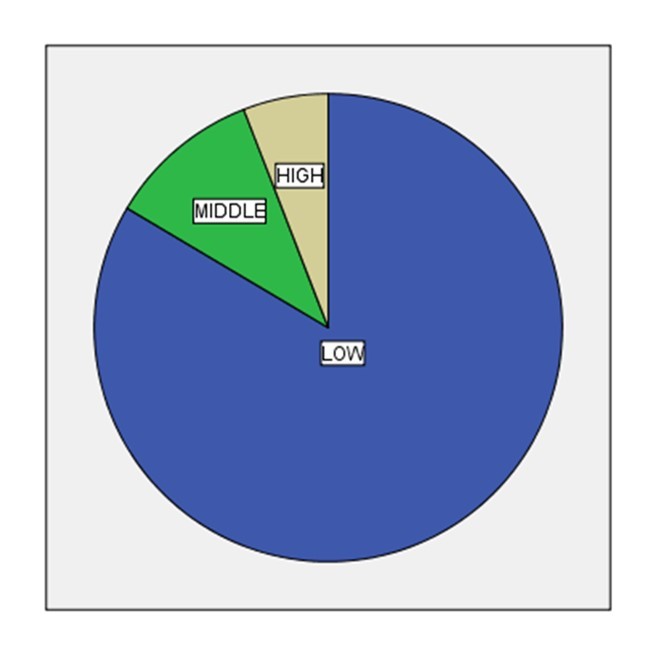 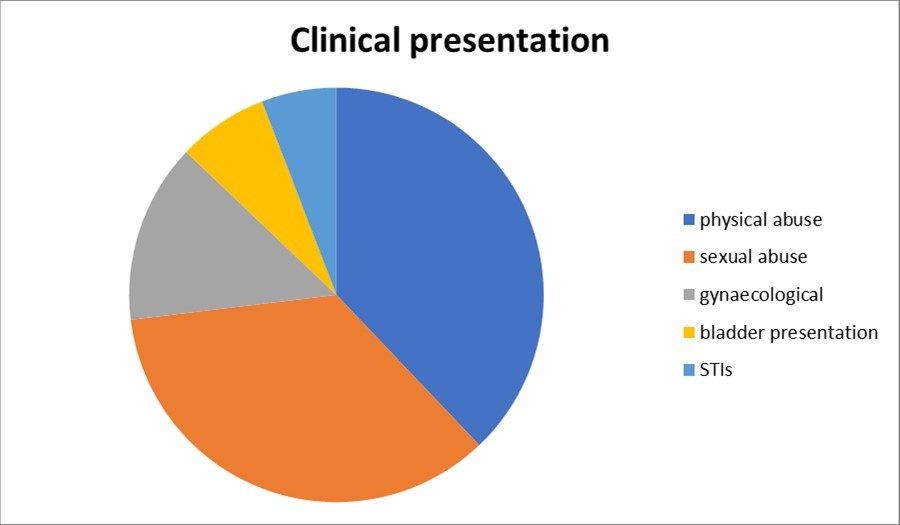 GBV survivors who attended the GBV clinic at our facility were females who were mainly (>80%) of low socioeconomic background. A similar pattern of female predominance was reported in lokoja13 and Enugu14 Nigeria previously. Presentations by GBV Survivors in a GBV Clinic are varied depending on the form of GBV. Calub had documented that even the various types of GBV have peculiar presentations such as slapping, kicking, restraining, choking and any such other unwanted variants of physical contacts from another person that can lead to harm, injury and / or discomfort in physical abuse; honour killing, a harmful traditional practice in which a woman is murdered for putting the family in shame through refusal of forced marriage or attempting to leave a toxic marriage, for adultery and other forms of domestic violence including dowry violence and acid throwing; stalking which is unwanted or obsessive attention that can result in harassment; all forms of sexual abuse including rape and sexual harassment; human trafficking which includes all forms of forceful, fraudulent, or deceptive acquisition of persons with the intent of exploiting the person more especially for commercial sex trade and emotional / psychological abuse such as verbal attack and social abuse including isolation, discrimination, alienation for whatsoever reason.5

Different studies have documented one set or combinations of clinical presentations of GBV victims that fall into one or more of these six domains of GBV types. Mittal and colleagues reported mainly sexual abuse with perineal injuries among pediatric GBV survivors in India.9In their study in Kano, Northern Nigeria, Iliyasu et al, documented that among University female undergraduates, 22.8%, 22.2% and 50.8% presented with physical, sexual and emotional abuserespectively.6while in a systematic review on studies on presentations of GBV survivors with domestic violence, 49.12% of the studies reported emotional/psychological abuse as common presentation, with 10.53% and 8.77% of the studies documenting gynaecological and/or sexually transmitted infections and combination of somatic symptoms as presentations.15Sexual violence was also reported as the commonest form in Lokoja and Enugu Nigeria although the most common presenting complaint was Pain.13,14

Our study established that physical abuse in the forms of battering, human bite, walking and sitting disturbances, hearing loss possibly from slapping or hitting and red eye possibly from trauma on the eye, constituted 37.6% of the clinical presentations, sexual abuse in the form of forced sex constituted 34.9%, while gynaecological / obstetrics presentations in the forms of bleeding per vagina, pregnancy due to forced sex and vaginal pain made up 13.9%. Others like urinary problem and sexually transmitted infections presenting as vaginal discharge constituted 7.0% and 5.8% respectively. Unlike the findings in in other parts of Nigeria,6, 13, 14, 15 our study did not report cases of psychological /emotional abuse which even though might have co-existed among the GBV survivors that visited our facility, may have been masked by the more prioritized presentation of physical abuse which was the commonest clinical presentation in our facility. Secondly physical abuse rather than sexual abuse had higher proportion of presentation as against documentations from other studies.9,13This study did not reveal presentations of human trafficking, stalking, honour killing, dowry violence and acid throwing which have been reported in some cases of GBV.5 However gynaecological / obstetric complaints which has been established by some scholars was also one of our findings, just like presence of sexually transmitted diseases.15 A striking clinical presentation by survivors in this research work, is the possibility of bladder injury and/or diseases which was reported as urinary incontinence. Several works have documented physical abuse such as kicking as one of the causes of vesico-vaginal fistula which commonly presents as urinary incontinence.16

Physical abuse was the commonest presentation of GBV and presented in several forms such as human bite, battering, hearing loss and difficulties in walking or sitting. Emotional / psychological abuse which is a major presentation in some climes were masked in this clime either as a result of cultural inhibitions of such expression or prioritization of physical injuries/harm as a health seeking complaint. It is recommended that victims of GBV should not only be screened for possible bladder injury but should also receive psychotherapy since in nearly all case psychological complaints are masked.